The volume of Internet-borne cyber attacks on UK businesses increased by a fifth (19 percent) in 2020, according to our analysis. Companies in the UK experienced 686,961 individual attempts each, on average, to breach their systems online last year, up from 576,575 in 2019.

2020 was the busiest year on record for cyber attacks on UK companies. The volume of attacks surged as the UK went into lockdown for the first time and remained exceptionally high during the remainder of 2020. Businesses experienced attempts to breach their systems at a rate the equivalent of once every 46 seconds last year. This compares to an attack every 55 seconds in 2019. 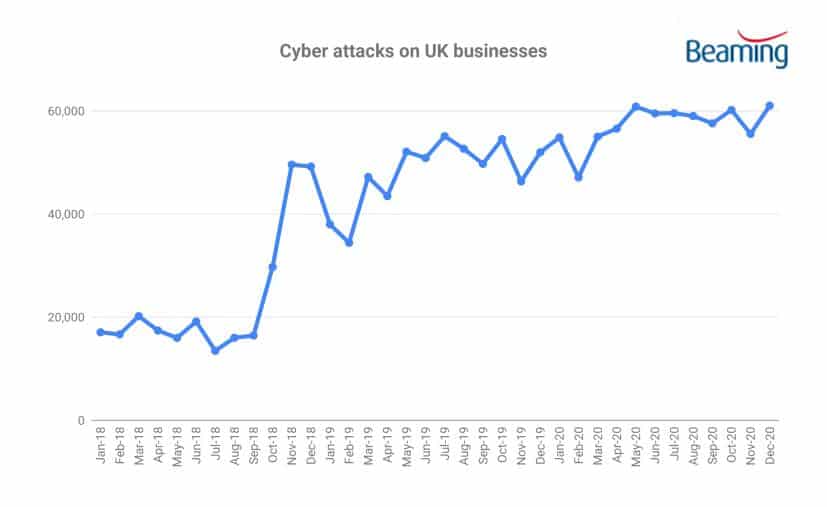 One in ten cyber attacks received by UK companies in 2020 sought to gain control of devices connected to the Internet of Things. Company file-sharing services, databases and web applications were also targeted more than 10,000 times each in 2020.

The greatest threat to UK businesses online appeared to come from China in 2020, with Beaming analysts identifying 189,695 unique IP addresses in the country as the source of attacks throughout the year. Beaming also traced large numbers of cyber attacks to locations in Taiwan (88,221), Vietnam (81,570), the USA (79,019) and Brazil (73,183).

‘The threat to UK businesses was magnified in 2020, as the volume of attacks continued to grow and the Internet became increasingly important to many more parts of the economy.’
Sonia Blizzard, Managing Director, Beaming

Sonia Blizzard, managing director of Beaming, comments: “The threat to UK businesses from hackers and other malicious elements online was magnified in 2020, as the volume of attacks continued to grow and the Internet became increasingly important to many more parts of the economy. We saw the best of the Internet in 2020 as businesses adapted to survive. Businesses need to do everything they can to increase their resilience to the growing threat posed by the very worst elements online.”

Stay up to date with the cyber threat level

Our cyber attack analysis is released quarterly, with subscribers being first to hear the news, with exclusive data & insights. Enter your email address below to join the club.