A surge in attacks originating from Europe

What will the prevalent cyber threats of 2018 be for UK businesses? Our first cyber threat report of the year has unveiled that: 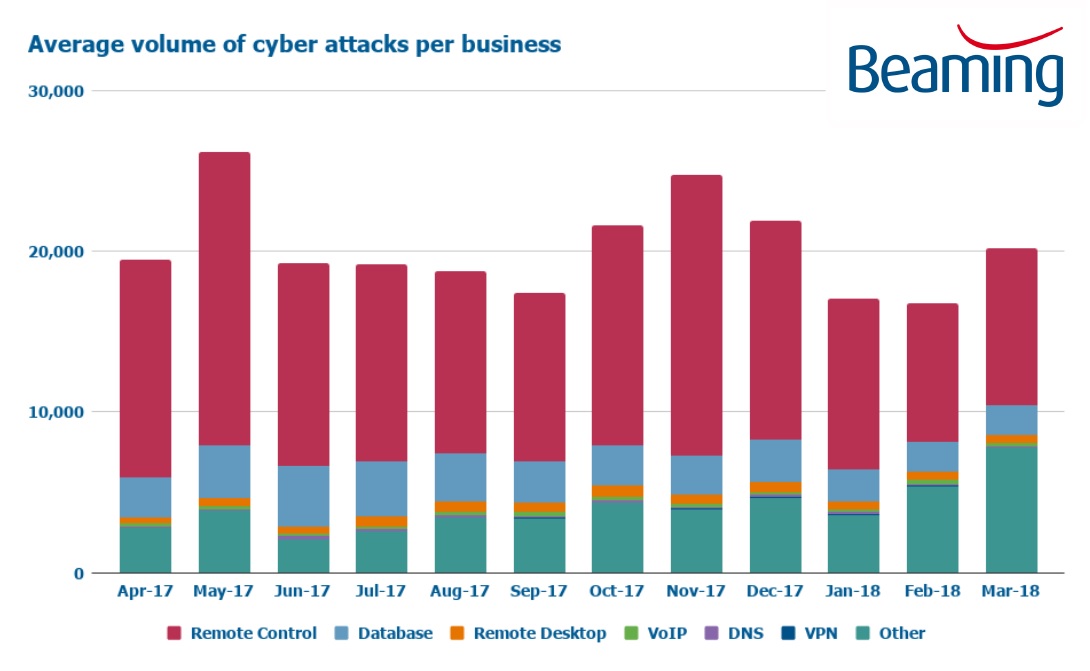 The volume of internet-borne cyber attacks on UK businesses increased by more than a quarter (27%) in the first three months of 2018, according to our research. On average, each UK firm with an internet connection experienced 600 attempts a day to breach their corporate firewalls between January and March this year, compared to 474 attempts a day each in the same period of 2017.

While one in ten (11%) of cyber attacks sought to compromise databases, more than half (54%) targeted devices connected to the Internet of Things such as building control systems and networked security cameras. Beaming believes that hackers target these devices, which can be controlled remotely over the internet, to help them launch Distributed Denial of Service (DDoS) attacks at a later stage.

With 44% of all cyber attacks on UK businesses coming from the continent in March, Europe overtook Asia to become the most common source of attacks for the first time. More than a third (35%) originated from locations in the Czech Republic and a further 12% were from Russian sources.

Sonia Blizzard, managing director of Beaming, comments: “2018 has been the worst start to a year we’ve seen for the volume of cyber attacks on UK businesses, in large part due to an unusual increase in activity originating from Europe since the start of March.”

“Company firewalls and IT security systems have been under constant pressure from malicious computer scripts and we’ve had to constantly update our network-level protections to keep up with new and evolving threats.

“It is important that businesses of all sizes regularly review their cyber security measures, monitor their IT systems and communication networks for unusual activity and take all the help they can get to stay ahead of the criminals.”