The volume of internet-borne cyber attacks on UK businesses increased by more than a third (34 percent) in the three months to the end of September, according to our new analysis.

On average, UK businesses with internet connections were subjected to 71,253 online attacks each during the third quarter of 2018, the equivalent of 774 a day or at least one every two minutes. This was a significant increase on the second quarter of 2018, when Beaming identified 578 attacks a day.

European cyber attacks represented the greatest threat to UK organisations online for the second quarter in succession. Almost half (42 percent) of attacks originated from European locations over the last three months, while a third (32 percent) were traced to locations in Asia. The volume of attacks coming from locations within Europe more than doubled since the start of 2018, from 3,365 per company in January to 11,222 in September. 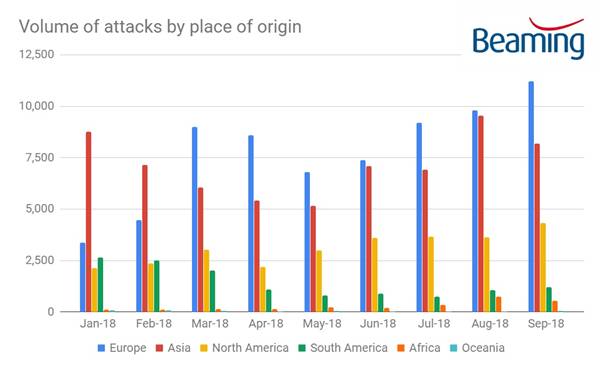 Connected devices such as building control systems and networked security cameras, which can be controlled remotely over the internet, continued to be the most targeted applications over the summer, attracting more than a third (36 percent) of attacks. The volume of attacks targeting internet-enabled VOIP telephone systems and virtual private networks (VPN), which are used to protect private web traffic as it travels over the internet, more than doubled over the last three months.

Sonia Blizzard, managing director of Beaming, comments: “Many businesses, particularly at the smaller end, have invested in more sophisticated cyber security systems to protect their data and communications networks over the last year or so. Hackers have tried to bypass these systems through social engineering and more targeted phishing attacks, and we are now seeing a resurgence in attacks that trawl the internet seeking to exploit any vulnerabilities in company firewalls.”