Viruses and data theft considered the biggest threats in business

UK bosses rank computer viruses and data theft as the biggest security threats to their businesses, according to new research conducted by Beaming.

We investigated what bosses consider to be the biggest threats in business, discovering that cyber security breaches cost UK companies £34.1 billion last year, with bills for managing malware and data theft incidents amounting to £7.5 billion and £6.2 billion respectively.

One in eight (13 per cent) leaders said their IT infrastructure had been damaged by viruses over the last 12 months, costing infected organisations £10,516 in time and money spent managing each incident. Employees were found to be responsible for infecting computing systems in more than a third of cases (39 per cent).

More than a fifth (22%) of business leaders told Beaming’s researchers they were ‘highly concerned’ about the threat of computer viruses. Half (49%) have enhanced the cyber security defences that protect their technology and communications networks and almost three quarters (72%) have insurance to cover losses caused by malware.

Large and medium businesses were almost twice as likely to contract viruses as smaller companies. 21% of firms with over 250 employees and 19% of 100 – 249 people businesses suffered due to malware last year, compared to just 11% sub-100 people businesses.

18% of business leaders said they were highly concerned by data theft and had invested in extensive measures to combat hackers. Fear of hackers was greatest amongst large companies, and for good reason: 16% of large companies suffered successful attacks last year, compared to 12% of medium sized firms and 4% of small businesses. The average cost of each attack is estimated to be £16,264.

Data and intellectual property are valuable assets, but like any asset they are vulnerable to damage, loss or theft. Leaders recognise that cyber-attacks present a critical risk to their businesses and have invested in enhanced encryption, network level monitoring and secure connectivity. These are must-haves for businesses today. 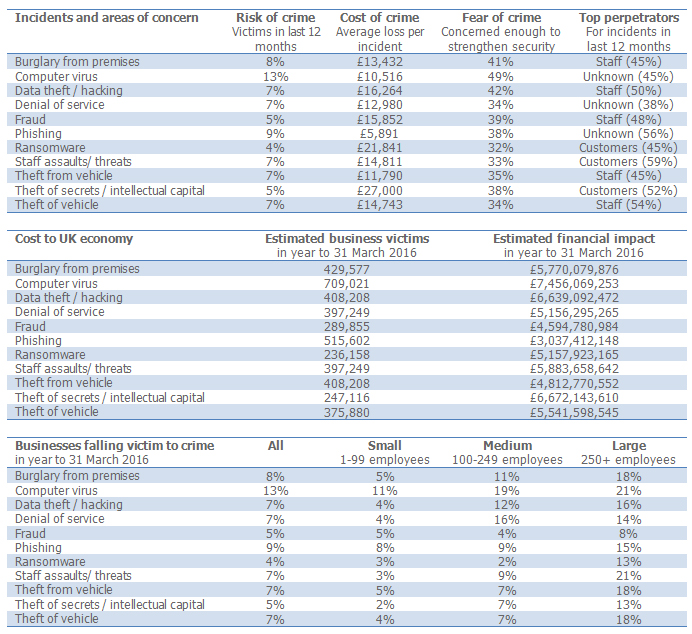 Stay up to date

Read the latest research stats, news and tips from the world of small business and find out what’s new at Beaming.