UK businesses are attacked online once every 2.5 minutes 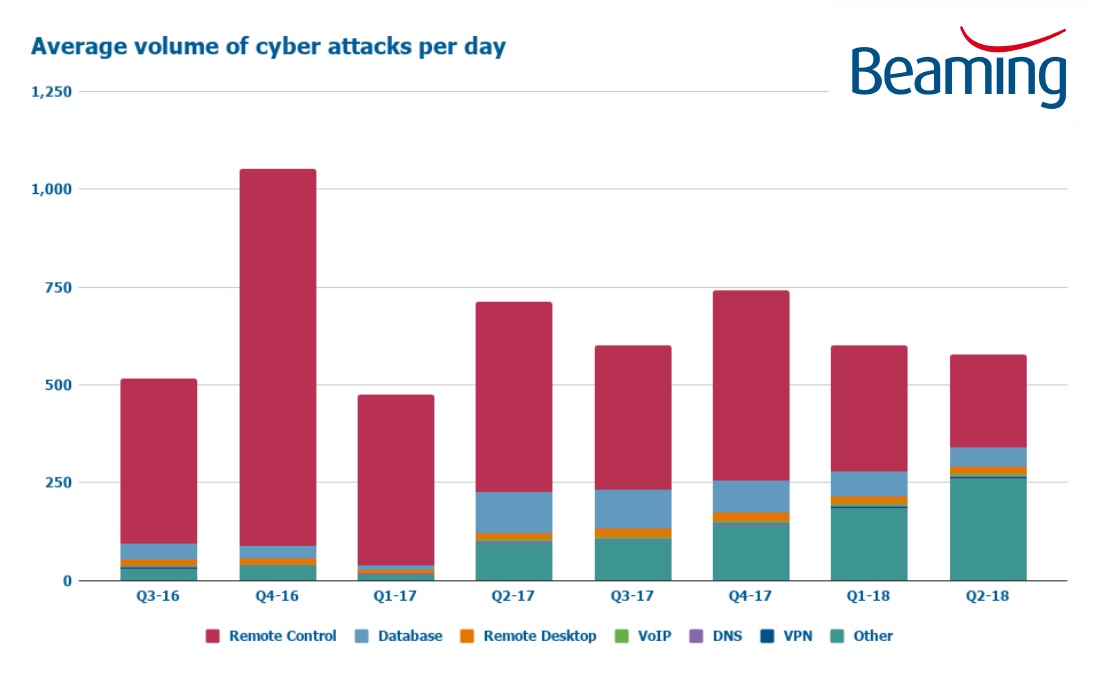 Our latest cyber attack figures show that UK businesses were subjected to 52,596 attacks each on average in the three months to the end of June, the equivalent of 578 attempts a day or once every two and a half minutes, according to our research.

Although the rate of attack was slightly down on that experienced in the first quarter of the year, when businesses received 53,981 attacks each, there was an increase in the number of attacks targeting remote desktop services. On average, businesses received 1,655 attempts each to breach remote desktop systems between April and June this year, eight percent more than in the preceding quarter.

Remotely controlled devices such as building control systems and networked security cameras were the most commonly targeted systems over the last three months, attracting 41 percent of all attacks. Businesses experienced 21,499 attempts each on average to take control of IoT devices during Q2. Beaming believes hackers target IoT devices for use in Distributed Denial of Service (DDoS) attacks.

Sonia Blizzard, managing director of Beaming, comments: “Cyber attack levels have been relatively stable so far this year, but the cyber criminals have not stood still. Businesses continue to be subjected to hundreds of attacks online every day and those attacks seek to infiltrate a broad range of different applications. Business leaders should think seriously about using multiple layers of protection now, at the network level and on each and every device, to ensure they maintain their resilience to attack.”

Bill MacGregor, Director at Corps Security, comments: “The latest cyber attack figures from Beaming show that companies cannot afford to be complacent when it comes to security. Criminals target organisations online to steal their data, to use their systems for illicit purposes and to take down their physical security infrastructure too. It is vital that businesses maintain both their physical and cyber security defences to safeguard their information and operations.”